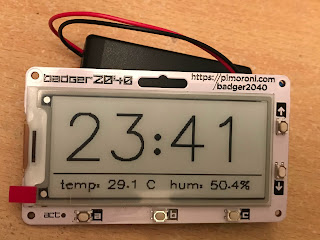 It has other goodies like 2Mb of flash ram, some buttons and lots of connectors such as a battery connector, stemma/qwiic socket and breakout pads for various serial connections. And USB-C for programming and serial in/out. 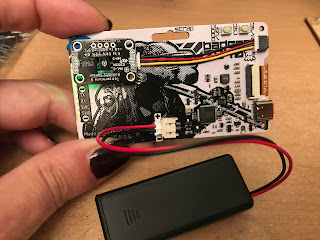 I've added an Adafruit temperature / humitity sensor using the stemma connector. This particular sensor is AHT20. The only negative thing about that for this project is that it has a fixed i2c address, and I would have liked to hook up two, one for indoor and one for outdoor temperature. I'll have to buy another which is a different type and has a different address.
For now my program is reading the data from the one sensor and displaying the temp and humidity. This took me some time because the libraries for this sensor (that I could find) were either circuit python or arduino.  If you want to use either of those things, you only need to write a couple of lines of code. For C (or in this case C++)  I had to write my own code starting with i2c_write_blocking() and i2c_read_blocking() and referring to the AHT20 data sheet and the Arduino library. An annoying bug (on my part) meant that I spent more hours than I should have on that.
With that done it was a breeze to print the stuff to the screen (using the Badger C++ example code). I wrote the clock from scratch using the time.h functions within the Pi Pico C SDK to access and process the hardware timer - get_absolute_time(), to_ms_since_boot() etc.  I've got the up and down buttons adjusting the hours or minutes up or down, with buttons A and B switching between adjusting hours and minutes.
It looks great. The e-ink display is very easy to read in any light and uses no power, except when updating.  I've got the screen updating every 30s or if you push a button to adjust the time.  Another curious thing about this type of display is that it keeps displaying its contents even with power disconnected. Meaning if you wear it as an actual badge, you don't need to power it once it's displaying what you want!
The battery pack that comes with the Badger is a bit chunky (two AAAs inside). I don't know how long that lasts, but I might use a small lithium battery instead, that can be stowed more easily on the back.

I've now got it running off my first found-free-in-the-street  battery. This is a relatively small one compared to the 500+ mAh ones Big Clive has been finding but it is nice and flat and it has been powering another pico project of mine and showed no signs of flagging. I'll be fascinated to see how long it runs the Badger! 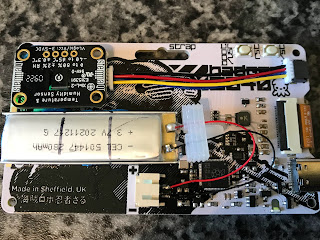 Another improvement I've made today is to make the clock periodically write some details to the flash memory, so that if power is removed, it'll start up displaying the same time as it did when disconnected. That saves a lot of button-pressing after a battery change.
I've been struggling with writing to the flash memory on the Pico and on this device, but today I solved my issue. Basically don't have USB stdio enabled while trying to write to the flash. 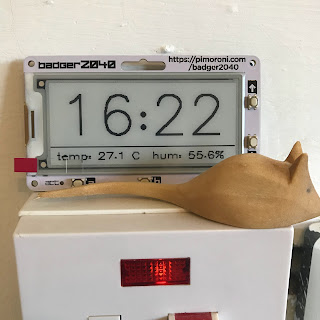