This is probably the most satisfying new release ever from NPD at PeacockMedia Towers. It represents a new direction of exploration for us.

Work on this was prompted by me failing to find a plugin component that could be used by my favourite sound recorder as a filter to remove pops and crackles, or a plugin for a player to filter the pops in real time during playback.

The work has involved a steep learning curve with Apple's AVAudioEngine. The documentation is far from thorough and there's very little sample code around. That has not been fun but learning more about sound processing (DSP) and getting hands-on with some C++ really has been enjoyable.

We now have a standalone app that will open a sound file, apply pop filtering (pretty quickly - currently <6s for a 4 minute track, but I hope to significantly improve this).

The pop filter is applied, along with EQ and normalisation. For some reason, LPs seem to vary quite widely in sound (I think this is a different thing from playback equalization curves for early LPs and 78s.) Either way we intend that the graphic EQ in Vinyl Shine be flexible enough to handle all of this.

Options are minimal. A commercial app I currently use for pop filtering works ok but the result isn't perfect and it offers a shedload of options. What do those options mean? What am I supposed to change? Surely a pop is a pop, identify and remove it. Fewer options is the Mac way.

Vinyl Shine allows you to listen to the result and toggle between original and cleaned audio. And save the result as a new file when you're happy. (The final offline render is very quick, ~3s for a 4m song).

For the time being it currently exists as a standalone app and is working pretty well, making crackly recording much more listenable. It'll shortly be available as a free beta.

An example came to light this week of a link from an https:// to an insecure page on the same domain that Scrutiny had been missing.

If you're scanning a secure site, Scrutiny can help you migration to a secure site by reporting links to insecure pages, and also pages which use mixed / insecure content (js, css, image files which are http://).

In this case, the target of a link was secure, but that link was redirecting to an insecure page. This particular situation had gone unreported in the insecure content table simply because of the order that Scrutiny was doing things.

Scrutiny 8.1.2 contains this and some other fixes / enhancements

For the record, I think Craig is a superstar, and I'm genuinely into the dark mode and dynamic desktops.

But Monday's WWDC left many questions unanswered, like why were the guys on stage all wearing those shoes with the white soles? Was it a tribute to Patrick McGoohan's The Prisoner, where the purpose of 'The Village' was to break Number 6's will to be an individual? Surely not.

Seriously though, MacOs Mojave (which sounds close enough to Mojito to raise my pulse)  excited me more than any new OS since Mavericks. The cartoon's more about the fact that the latest, most breathtaking technology is carried around in people's pockets for the most trivial purposes (singing poop emoji, anyone?) More of that another time.
Posted by peahen at 15:27 No comments:

How did that ever work?

Don't judge the code - this is a tool that was written many many years ago, and it's only a simple thing for personal use. So it was only ever developed to the "it just about works" standard and the project has been copied from computer to computer ever since, receiving the minimum updates to keep it running.

With the beta of 10.14 'Mojave' installed on a mac (which sounds enough like 'Mojito' to raise my pulse) unsurprisingly I started to notice a few things not working as before.

I love finding and fixing problems, so the regular round of fixes with each release of OSX / MacOS  is no hardship. It's particularly fun when you have a "how did that ever work?" moment.

The resulting list is displayed in a tableview and has always appeared in alphabetical order.

So not only is directoryContentsAtPath: still apparently working after being deprecated such a long time ago, apparently it used to return the directory listing sorted in alphabetical order, and no longer does.

It was easy to add [collection sortUsingSelector:@selector(caseInsensitiveCompare:)];
to restore the list to alphabetical order (collection being an NSMutableArray containing NSStrings) but I'm just surprised  that it wasn't necessary before.

The documentation for directoryContentsAtPath: doesn't mention that the return array is sorted, so it should never have been taken for granted. But hey, if something works the way you want it, you don't always think any further.

To bring this up to scratch, the suggested alternative to directoryContentsAtPath: is
contentsOfDirectoryAtPath:Error:  so getting rid of that warning is really easy, just declare an NSError object and pass it in. And then report the NSError's 'localizeddescription' if it contains a non-null value. Or simply pass nil as the error: parameter if you feel lazy or don't care about the success of the operation.

Didn't Scrutiny used to do this?

Yes, but when the w3c validator's 'nu' engine came online, it broke Scrutiny's ability to test every page. The 'nu' engine no longer returned the number of errors and warnings in the response header, which Scrutiny had used as a fast way to get basic stats for each page. It also stopped responding after a limited number of requests (some Scrutiny users have large websites).

After exploring some other options (notably html tidy, which is installed on every mac) it appears that the W3C service now offers a web service which is responding well and we haven't seen it clam up after a large number of fast requests (even when using a large number of threads).

The work in progress is called Tidiness (obviously a reference to tidy, which we've been experimenting with).

It contains a newer version of tidy than the one installed on your Mac. However, the html validation results are useful but not as definitive as the ones from the W3C service.

So Tidiness as it stands is a bit of a hybrid. It crawls your website, passing each page to the W3C service (as a web service). If you like you can switch to tidy for the validation, which makes things much quicker as everything is then running locally. If you like, you can simultaneously make accessibility checks at level 1,2 or 3, with all of the results presented together.

Here are some shots. 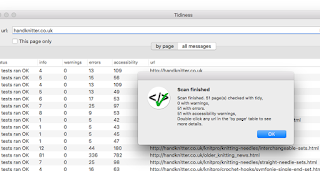 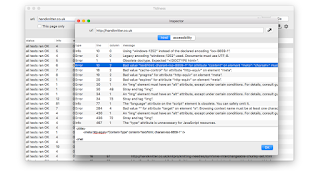 [update 3 Jan 2021] Due to lack of interest, this project is mothballed. We have since built more html validation tests into Scrutiny / Integrity Pro and that functionality will be expanded through 2021. If you are interested in Tidiness - please tell us.
Posted by peahen at 14:09 No comments:

Seen here looking more like a desktop icon*, is the first release of OSX. It's now older than the classic Mac OS (up to 9).

I remember the sense of awe at the non-jagged icons, transparency, more realistic-looking shadows and the new traffic-light 'sweeties' in the top-right corner of windows.

It really doesn't look *that* dated. That Mail icon has hardly changed, just a bit more kiddie-coloured, and the magnification effect is still there.  Glassy-looking buttons were cool at the turn of the century, but by 10.6, the aqua look was looking a bit unnecessarily clumsy. The stripey background of windows and sheets didn't last so long. We had a weird dual-look with the windows. OS9 was already experimenting with the brushed aluminium look. Very different from the more plasticky look of the regular window borders and backgrounds. From memory, I think the human interface guidelines said that the aluminium look was appropriate where the window was to minic a control panel.

I really lament the passing of the 3D hyper-real-looking buttons and controls. I regularly use a couple of Macs on Snow Leopard and Mavericks.  I get the very 'clean' concept but when you can't immediately see whether some text on a plain white background is a button, input field or just some text, that's just plain unhelpful, however beautiful it looks.

Thanks to Jason Snell for the facts and figures:
https://sixcolors.com/post/2018/05/today-mac-os-x-is-as-old-as-the-classic-mac-os/