Last year we spent many months rewriting our website crawling engine, the reasons are here.

Since then, Integrity went through a beta period and eventually Integrity, Integrity Plus and Pro version 12 were released.

There have been many updates, those apps are becoming mature, the problems found are now increasingly obscure.

As well as fixing issues with the new Integrity, Scrutiny has been catching up.

It's now based on Integrity. That approach comes with some compromises (see notes below) but the benefits for all of us are great.

It also means a totally different interface. Or rather reverting, because up until version 4 Scrutiny had the open, tabbed Integrity-like interface. The move away from that wasn't popular and Scrutiny's UI has been its weak point. 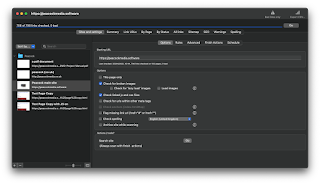 Notes: (also in the release notes within the .dmg)

There will be no autosaved data for a site until you've run a scan. Your previous scans will only be visible in the previous version. V12 requires new scans before autosaved data is available. This is due to the format of some of the data changing a little,

V12 isn't document-based. This is part of consolidating Scrutiny & Integrity. Being document-based requires a different architecture within the app, introduces the need for all sorts of complexity and workarounds. The compromise is that it's no longer possible to run multiple scans at the same time. Until there's a 'queueing' system built into Scrutiny 12, you'll need to make sure that any scheduled scans don't overlap time-wise.

V12 doesn't have monitoring or orphan check.  I don't think either of these features will be missed, and if there is a call for the monitoring functionality, it should be in a separate app.

The layout is different. I should say 'reverted' because until version 4, Scrutiny shared the Integrity-style interface, and the move away from that wasn't popular. Scrutiny's UI for managing websites hasn't been very user-friendly and had come in for some criticism. It also made it impossible for Voiceover to work (requires visible tabs).

Automatic ftp of sitemaps is no longer available. Scrutiny saves the xml sitemap, you must transfer it yourself.  ftp and ftp+SSL (ftps) has been fine but sftp (which in my experience is now more common) has been problematic

French localisation is unfortunately no longer available. I'm grateful to French-speaking paying customers and people who have offered to help with the translation. The problem isn't paying for translation, but the fact that any new feature or change to the interface (which are happening all the time) requires an interaction with the translator and I prefer a much more agile process. The apps haven't been noticeably more popular in French-speaking countries than without the localisation.

Email ThisBlogThis!Share to TwitterShare to FacebookShare to Pinterest
Labels: scrutiny

Having got so far with the MIDI SID project, I had this real mess of wires and boards. Then I started to add to the carnage with knobs and a display. 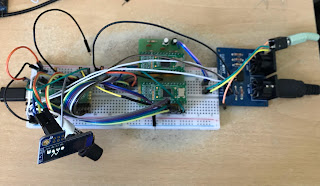 The problem was that if something stopped working I couldn't be sure whether it was because I'd got something wrong, or had just jogged a connection.
Happily, prototype boards are so cheap that you can order something without worrying about the cost. This isn't even really a prototype yet, not all of the components are on the board. I just wanted the Pico, two SIDs (in this case swinsids) and the MIDI in circuit soldered firmly in place so that I could experiment with knobs, buttons and displays, and develop the software without fear of breaking it by jogging the desk! 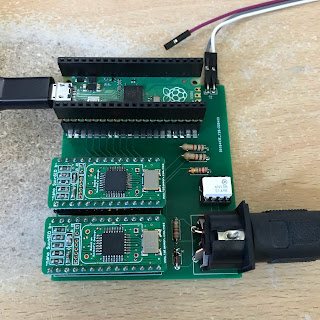 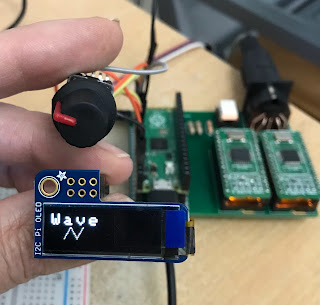 To get you up-to-date if you haven't seen my ramblings about this, I'd love a box with MIDI input, SID chips inside, audio out, and simple controls. I'd like to be able to play a .mid file into it, or plug in a keyboard, with options for polyphonic or monophonic output. (I've done some of this using a C64 and MIDI cartridge, but it'll be good to have a standalone box.)  I'd like to try a larger version with enough SIDs to be able to map each midi channel to a voice. Maybe in time I could add the components needed to support real SIDs, but being able to use ARMSIDs would be good as they're a great replacement. (I'm not sure that it's ethical to encourage anyone to use precious real SIDs in something like this.
Quick demo of the thing working (just one channel in, one voice playing). I've got Logic Pro playing a simple tune, with a USB-MIDI converter allowing me to plug that into this board.
If you're interested in the project, I'm going to use the hashtag #MIDISID on Twitter.
Posted by peahen at 09:30 No comments: