The future for Integrity and Scrutiny

It feels that the various flavours of Integrity and Scrutiny have reached a plateau, they do what they do and judging by their popularity, they're doing it well (all comments welcome).

That's not to say that they're dormant. Far from it. You can see from the release notes that they've all received frequent updates. But these now tend to be improvements and updates rather than new features.

The biggest news recently has been the HTML validation, and work on that will continue.

Work has already begun on v11 of Integrity and Scrutiny, and it'll necessarily be a deep rewrite of the engine. Which will of course be called the v12 engine, because who's heard of a v11 engine?!

Futureproofing is needed. Partly to keep up with changes in the MacOS system, partly to revise the internal structure of the data and partly to replace some tired stuff with newer stuff, for example our current 'sitesucker-like' archiving system.

There are long-standing issues that need deeper rewrites in order to fix properly. And parts of the interface that could do with a facelift, particular Scrutiny's website / config management screen.

On the business front, it's more than likely that there will be a price increase, but as usual, no upgrade fee for licence holders of v7 or above. (hint: now is a very good time to buy!)

I've just posted a video showing the new Integrity Pro in action.If you use Integrity Pro, this won't *look* tremendously different. The changes are as outlined above; much is under-the-hood, for efficiency or just to keep up-to-date with the changing system and web standards. There are one or two important features missing from the interface in this video. 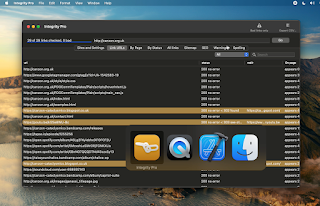