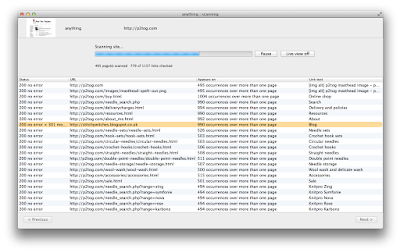 I'm sure this will please a lot of people.

Scrutiny 5 included a new UI (in reviews, the interface of Scrutiny 4 and before was responsible for lost marks. The new previous / next system was well-received). But not being able to see the results as they happen has been a running theme in support calls since then.

There are many reasons for the lonely progress bar in v5. Not least is that constantly refreshing tableviews / outlineviews eats up cpu and resources. With a very large site, the engine goes faster and further if a tableview is not visible. (Since the v6 engine, there are Scrutiny users crawling millions of links in one sitting now. Efficiency is important!)

As practical as it is in those ways, one major downside of the bare progress bar is that if your scan goes a little pear-shaped (maybe because of timeouts, or because some settings need tweaking) you don't know that until the scan finishes, or until you realise that it's going on far longer than it should. The workaround' for this was a menu option 'View > Partial results' which you'll find in more recent versions of 5 and in 6 (up to 6.1.5). (You need to pause before this option can be used).

But there has still been demand to see what's happening. Maybe so that you can spot any problems as they're happening, maybe so that you can begin to visually scan the results while the scan is taking place, or maybe because it's just fun to watch the numbers change in front of your eyes!

So in 6.2 there's 'live view'. Alongside the progress bar is a button which unfolds a table (see screenshot above). There is a warning (once per session, hopefully not too annoying) that it's not recommended for larger sites. It's not possible to open up a link inspector, or expand one of the rows to see further details, but there's enough there to give that satisfying visual feedback and spot any problems as they happen.

[update] Scrutiny 6.2 is now out of beta, please download the current version from Scrutiny's home page

Please let me know of any problems you might spot.