Review - Notebook for Mac from Zoho 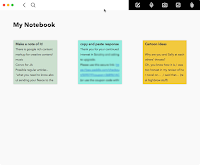 One person's pro is another's con. I've seen Notebook lose stars because it doesn't allow you to set the colour of text. But I've long been looking for a sticky note alternative that *doesn't* do rich text, ie allows me to copy / paste in and out as plain text. The very long-standing Stickies app is unbelievably still here in High Sierra, unchanged for decades. But those have long worked using rich text.

(OK I can usually cmd-alt-shift-V for paste as plain text, but that doesn't work everywhere.)

Initially it appeared that Notebook's text cards are plain text, but after some use I found that they're not plain-text - but not rich-text either. More of that later.

There's some nomenclature and a few concepts to learn, as with any app. The thing I think of as a sticky note is a 'text card' and collections of various types of note are called 'Notebooks'. Nothing too taxing there. When you start up there is a quick tour (later accessible from the Help menu - "Onboarding" - what horrible business-speak!) but frankly I find that kind of thing annoying. A little like peas; I know they're good for me but I want to go straight for the meat. There's a bit of emphasis on gestures, which a. don't seem to work with my magic mouse, and b. is a swipe or a pinch-out really easier than a double-click? I found myself single-clicking things and expecting them to open, which they don't and I don't see why they couldn't. All-in-all, up and running in moments with minimal hold-ups and bafflement. 9.5/10

This is the top-billed selling point - "the most beautiful note-taking app across devices". It certainly looks polished, if very white. It has a non-standard 'modern web app' feel to it, with lots of sliding and whitespace. Non-standard in MacOS terms, that is. I guess the white background and weird white title bar (lacking a standard customisable toolbar) is for consistency with the iOS version of the app (losing a star here). If the text cards themselves don't behave exactly like sticky notes, they are very analogous. They have a random coloured background and have a sticky-note coloured-square look before you open them up. Notebooks (collections of cards) have customisable covers. These visual cues are very important as your brain gets older and less agile!   9/10

What does it offer over and above the tools that come with the OS?

Bizarrely I can almost create the look and functionality that I want using TextEdit - it allows me to create square plain text documents and set the background colour of each. Unfortunately it doesn't remember those background colours after quit and restart.

MacOS's Notes app scores highly for its syncing across devices (with some frequent annoying duplication). It's the app I have been using when I need to paste something or note down a thought when my phone is in my hand, and later retrieve on the computer. It allows you to organise things in a pretty basic way.

Reminders is as per Notes but for lists. Slightly annoying having to open both those system apps to have text and lists at my fingertips.

Notebook combines text / lists / images / voice and file attachments (why only certain file types?) It has good visual cues (custom covers on the notebooks and coloured background to the text cards).

It still doesn't give me plain text paste in/out, so a full mark lost here, because it's something I'm specifically looking for. But it's not rich text either.... It carries text size and weight, but not colour. It doesn't carry pasted-in font; each note does have its own font which is carried when copying and pasting out. If Zoho are reading, I'd LOVE the option for the text cards to look and work exactly as they do, but to have only plain text copied to the clipboard whenever I copy from a text card. 8/10

Notebook does the syncying across devices, but only by creating an account with Zoho. iCloud-enabling would make a 9/10 into full marks for this part.

Without a doubt Evernote. This is made clear by the File > Import from Evernote option. Personally I didn't get past EN's start screen because it didn't seem to want to let me continue without creating an account.

Notebook's 'quicknotes' feature is neat, allowing a quick paste of something from the status bar.  The ability to combine what I've been doing in Notes and in Reminders within one app. The ability to take voice memos and paste in pictures (as a separate card, not just because the cards are rich text - an important distinction). 10/10

This is the most remarkable thing about Notebook. The website clearly says that the app is free, subsidised by their business apps. They don't sell your data, there are no ads, there is no premium version, there are no crippled features. If there are any hidden costs, I haven't found them. Solid 10/10  here

Not quite meeting my 'plain text pasting out' requirements, and syncing probably good if you're willing to create an account with the makers. Combining functionality that I've been using various other apps for, and with neat fast access via the status bar. Thanks to Zoho for an incredibly functional and incredibly free app.  It all adds up to: