The Hue-topia Mac app goes back to November 2013. To be frank, it has been in a vicious cycle of very little interest / therefore very few updates, and has not kept up with changes from Philips such as additions to their API and dropping of support for the v1 (round) bridge.

From the start, Hue-topia had its own interface concepts which it shared with LIFXstyle. These didn't always align with the concepts of the Hue system. Therefore HT was doing a lot of conversion / bridging. This led to a lot of unnecessary complexity and inconsistency within the app,

Hue-topia version 4 is a new version for 2021 and way more of an overhaul than it may appear from the interface.  It is intended to be more of an interface with your bridge, and have concepts which align with the Hue system. 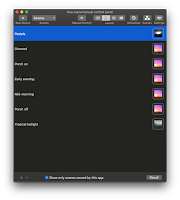 Key changes include:
Version 4 is just about ready for beta. ie most of the functionality (that's intended for v4.0) is there but is in the testing / fixing stage. It'll be freely available for public testing very shortly.
Posted by peahen at 07:05