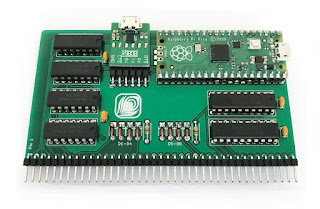 Minstrel the 4th is a modern recreation of the Jupiter Ace, a lesser-known home computer from 1982. It's notable for its use of Forth rather than BASIC which was common at the time.

The Ace had a ZX Spectrum-like rubber keyboard. The Minstrel's is an improvement but its small tactile switches don't really allow for fast typing. 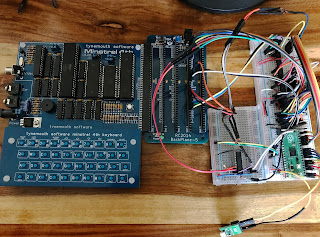 The Minstrel and similar computer scan the keyboard by reading a group of hardware ports which correspond with half-rows of the keyboard. They expose the bus as an expansion port, so it's possible to intercept those port reads. Here's my working prototype, it uses quite a bit of logic. The Pico's main job is to act as a USB host and allow a modern keyboard to be plugged into its own micro-USB port. and maps the keypresses it receives to the appropriate rows and columns of the Minstrel's keyboard matrix.

It's not only the size and arrangement of the keys that limit typing speed, but the fact that the keyboard matrix is scanned every 1/50th second and then not buffered. So even with modern key switches, this makes typing on computers like the Ace, ZX81 and Spectrum is a bit of a plod. It's easy for the Pico to buffer the keyboard input, and present it to the Minstrel one key at a time, at a speed that it can handle.

This also opens up the possibility of connecting a serial terminal to the device to allow listings to be pasted to the Minstrel. It also means that anything you type using a USB keyboard can be echoed to the terminal giving you a paper tape of  In the top picture you can see that the finished product has a USB-FTDI adaptor attached for this purpose.

My interface is now in production in small batches, please contact me for details.