With each year's announcements it's always a relief to hear that the Mac has at least another year of life. The convergence of Mac and iOS is taking many years to happen. Yesterdays talk of enhancing Sierra with efficiencies and switch to the Apple File System was pretty welcome.

I'm very curious about the VR and AR stuff, but more from a 'playing' perspective rather than seeing ways to incorporate them into what I do. But the machine-learning stuff I really can; I've been waiting for an API built into the OS for doing that kind of stuff.

I'd always expected the Mac to continue morphing into iOS but the biggest surprise yesterday was files / drag and drop / enhanced dock in iOS. (Meaning that the convergence is going to end up closer to the Mac than anticipated.) And as Craig demo'd all of this, his iPad screen looked more like the macOS than I'd ever expected. 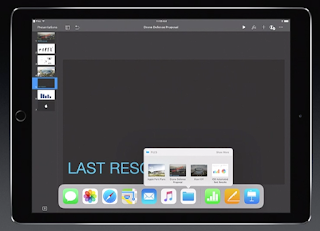 I'm not that bothered about the home pad, I think the built-in intelligence is a lot of guff, and they're very late to the party with a voice-activated computer in the room, I guess they thought the advanced speaker stuff was an area that Google and Amazon had been neglecting.

Email ThisBlogThis!Share to TwitterShare to FacebookShare to Pinterest
Labels: opinion