Where has Objective C gone in Apple's Documentation? 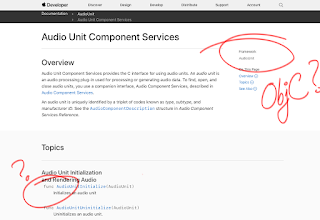 It's bugged me for a long time that these pages always appear pre-selected with Swift and don't remember my selection of Objective C.

To be fair, this isn't entirely unexpected. When Swift was announced, it was unlikely that they'd run the two languages in parallel for any length of time. I've been forced to learn another language in the past; my first dealings with Cocoa were in Java-cocoa (sounds tasty!). (Java was the first OO language I learned). Translating an entire project from the Java syntax to Obj-C when I could no longer compile the Java-Cocoa code was a PITA.

I felt the wind of change when I started to notice that the first solutions I found to problems contained Swift code rather than Objective C, and I either had to translate (easy if you're just looking for the best method to use, but harder if it's a whole block of example code you want to use) or keep Googling for another answer with an Obj-C code example.

I guess I'll have to find out how to use the built-in documentation and wait for the day that things are available in Swift but not Obj C.
Posted by peahen at 05:32