Since last week's announcement of Vinyl Shine, the app seemed to approach the point where it was usable. But then that seemed so far away from beta as it was lacking functionality.

At its core is the pop filter. That had taken a large amount of the development time and was becoming pretty effective.

But the app surrounding it wasn't so functional. Opening a file, running the filter and saving the clean file quickly gets tedious. Even if you run the filter over a whole side of an LP at a time, you first needed to run something else to record the sound and then something else to split and add track names.

So it seemed best to build more supporting functionality. We returned to the original aim of 'real time' filtering. Much coffee later and we have recording and real-time-pop-filtering done. Also splitting and saving individual tracks. It's becoming much more useful.

Scenario 1. Plug your record player into the computer. (USB or line-in). Simply use Vinyl Shine as a player, with the pop-filter running in real-time*. 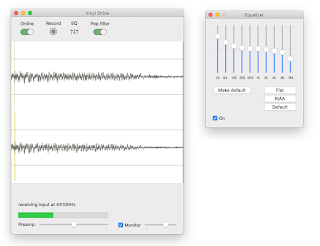 There's a 10-band graphic equaliser applied to the playthrough / recording  with the RIAA curve as a preset. Make your own default settings too.

Scenario 2. With the pop filter on, press record and put the needle down. Record a single track or a whole side, then switch to editing mode to normalise and select and save individual cleaned and normalised tracks. 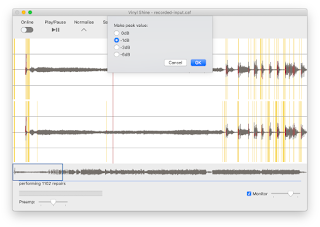 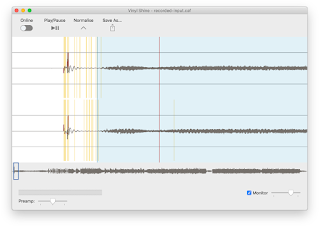 I'm also pleased with how 'cool' it's running. With many efficiencies still to be made, its cpu use is fine.

[update 8 Jul 18] After a weekend of working on refinements and efficiencies, this is how things are running with pop filtering switched on (testing here using a 2012 Mac mini).

* ok, it's running with a buffer. It's slightly odd putting the stylus down on the record and hearing that 'needle down' sound through the speakers a fraction of a second later, but otherwise the delay isn't really noticeable. [update] there's now an option in preferences for the amount of buffering, this can help avoid glitches in the playback caused by buffer underrun. This is only for listening pleasure. Even if the underrun happens, the glitch won't appear in the recording.
Posted by peahen at 07:49