2018 begins with a meltdown

We have started the year with the kind of story that TV and radio love. "Nearly all computers worldwide - and many other devices - have been exposed to security flaws which leave them vulnerable to attacks by hackers" (direct quote from BBC News). 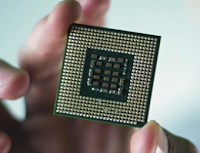 Tech correspondents were in their element, "The CPU is the 'brain' of the computer, if you like, and if someone can read everything in your brain, then they can read all of your sensitive information.." (I paraphrase only slightly).

The culprits are fiendishly-named Meltdown and Spectre.

Intel's response was the amusing classic, "It's not a bug it's a feature". The detail of it sounds much like a small boy caught red-handed, "I didn't do anything. Anyway, the others did it too."

In a nutshell, meltdown is easy to fix and has been. If your High Sierra system is up to date then you should be ok. Spectre is hard to patch and hasn't been so far but it's hard to exploit. (see Further Reading for more details.)

Install updates when available. And don't have nightmares.

Further reading:
Opinion on Intel's response:
https://www.theregister.co.uk/2018/01/04/intel_meltdown_spectre_bugs_the_registers_annotations/
Thorough and understandable rundown of the problems:
http://www.theregister.co.uk/2018/01/04/intel_amd_arm_cpu_vulnerability/
The BBC (who should know better) sensationalising and enjoying the chance to have a dig at Apple users:
http://www.bbc.co.uk/news/technology-42575033
XKCD:
https://xkcd.com/1938/
Posted by peahen at 06:46