New Year - Thoughts on the Mac App Store, Integrity Plus available there once again

If you've asked me over the last few years why I don't sell my apps via the Mac App Store, I'll have answered that I hate the store. One day I threw a tantrum over a problem (a catch-22  involving version numbers following a few rejections with one of my apps) and I petulantly took all of my apps off the store.

A decision made with the heart rather than the head, which is in character. But I'd been frustrated with the store since day one. Back then Apple took 2-3 weeks to review an app... Fast fixes to problems weren't possible.

Sandboxing was introduced and then made compulsory for apps listed on the Store. This is a security measure which gives you hoops to jump through and makes certain features impossible.

The iTunesConnect site (used for upload / submission) was not very user-friendly early on (let's not get into why the default music player was involved with installing apps on your computer). Apps get rejected. All of this meant that getting an app listed on the store was time-consuming and frustrating. Then Apple took a whopping 30% of your revenue.

It didn't (and still doesn't) allow for trial periods, which has always been very important for me. Developers get around this by making the app free and offering a 'pro' version (which is something I already have with Integrity / Integrity Plus) or making the app free and offering in-app purchases or subscriptions to a service. Or using advertising. None of which I really like in other apps and won't get involved with myself (another emotional rather than business decision).

I've been waiting for the day that the only way to install an app is via the Store, or by 'jailbreaking' your Mac, as with iOS. That day hasn't come (yet) but Gatekeeper has steered people away from web-downloading apps - even a code-signed app requires a 'lower' security setting than installing apps from the app store.

With all of this said, I do find things much improved.

New year - new start. I have let my logical head overrule my feelings and made the business decision to list paid apps on the store once more. The reason is simple, I want as many people to discover and use my apps as possible. In return for the frustrations and giving Apple a big cut, you get more users.

There are many things to conform with  (screenshot sizes, compulsory fields, all of which is pretty reasonable). Uploading and submitting wasn't so painful. Sandboxing still applies, as does the huge cut Apple take. I was amazed to find Integrity Plus approved within hours of finally managing to submit it. 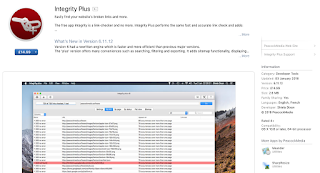 Future plans - I don't think that Scrutiny will appear on the Store again, it has some important features which aren't compatible with Sandboxing, such as the scheduling. But I am drawing plans for an 'Integrity Pro' which adds the SEO stuff that only Scrutiny has at the moment.